Skating in the Name of Evil: Number 3 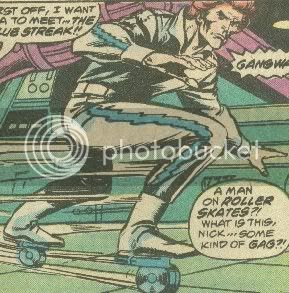 The majority of roller skating comic book characters debuted in the 70s, and today's subject is no exception. Meet Blue Streak, a recruit for the short-lived team called the Super-Agents of S.H.I.E.L.D. Fellow members included Quasar and Texas Twister. Turns out Blue was a double agent selling out our country for a paycheck from the sinister Corporation. Me, I think he just didn't want to be on the same team as Texas Twister. 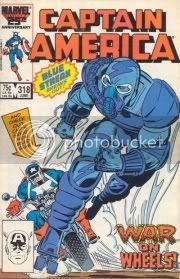 In the 80s he got a rad new costume that was faster than Captain America's motorbike. Then he was bumped off by a supervillain whose gimmick was killing lame-ass supervillains. Blue Streak is third on this list because the other two didn't get killed by that dude.
Posted by Banana Oil at 6:14 PM

This reminds me that I turned off the tv one night after watching a movie on Showtime, and in the morning when I turned it back on, Xanadu was playing.