I Hate Anime..well not exactly...

I end up in conversations sometimes with what I can only think of as the lonely step children of geekdom, Anime Fandom, in which folks ask me about how I feel about Anime.

I tend to, in order to stop the conversation going to places where I'll just get stared at with looks of incomprehension, just say that I hate anime.

I end up having to explain (because I am always told that I've never seen good Anime) that I've see lots of Anime. I'm older than people expect. Not so old that I was there when Astro Boy was created but old enough to have seen Ultraman (yesn not Anime but I'm making a point) when it was aired on what is now an all Spanish speaking channel in Chicago.

I was an 80's kid and that means that I was there for the Anime that is spoken about in hushed whispers and the non Anime that was pretty damn influenced by it and that 20 somethings today all seem to love with the same reverance that my generation had for Speed Racer and Captain Harlock.

I've decided that the only responsible thing to do (since my Netflix TV show queue has pooped the bed on me) is to list the Anime I really liked and challenge Anime fandom to stop Cosplaying for a minute and to get their hands out of their big baggy pants and suggest things like these things.

After we're done, you can put your little wings back on and continue watching that stuff with the swords that look like boat oars and such.

Cardcaptor Sakura (yeah I can't explain this either)

Fist of the Northstar

Ghost in the Shell (all)

Ninja Scroll (again, the 1st one)

Science Ninja Team Gatchaman (This is my favorite!!!!)

Note: I got the titles from this list from some website and I know it's not complete because there are titles I've seen that it didn;t mention. That shit is annoying. Grown ass men shouldn't be out searching web for lists of anime but if we are you should be completist about it. You're making anime fandom look bad.

Now then, I want folks to suggest ohter things I might like BUT I need to be able to find it or trust you enough to meet you in public where you will trade movies for beer.

Also, I know Fist of the Northstar is on the list as is Grappler Baki but that does not mean suggest the bloodiest shit you know of. Keep in mind that I have watched me some Sailor Moon. Tuxedo Mask was my boy so I understand what STORY and DRAMA are, you freaks.

I also included the Big O because I like me some Giant Robots. You'll do well to note that there is no Gundam or Escaflowne. That's because I need to be able to tell my big robot characters apart. Just because I like big robts doesn't mean I want 20 of them on my screen moving at 2 million frames per second.

As a rule, I'm gonna say, no singing or cooking. I was scarred by a bad Minmay experience. If you suggest something with singing and/or cooking, I'll send my boy Baby Seal to fix your little red wagon and you DO NOT want that.

I didn't include Cowboy Beebop either, because it was ass.

I want to avoit Anime with talking animals if possible or where people have cat ears or fox whiskers or where men tun into women if they have to wash. I'll avoid it and you should too.

I am also not going to make this a life mission. I'm just killing time so more cool ass TV shows can be released on DVD and then I'm going back to my cave with my whisky and Foreman grilled meat.

Email ThisBlogThis!Share to TwitterShare to FacebookShare to Pinterest
Labels: anime

I get asked this sometimes and my answers don;t really change all that much so I thought it'd be a good idea if I committed them to website.

These are ALMOST in order so if you want to yell at me for where I place things, go ahead. Yes, I meant to put The Great Darkness Saga ahead of everything else. Deal with it.

My Favorite Comics stories are: 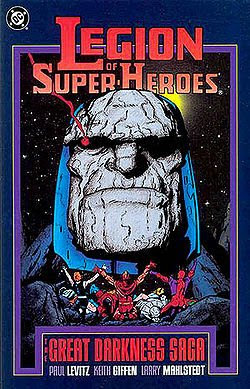 My Favorite Series Ever are: 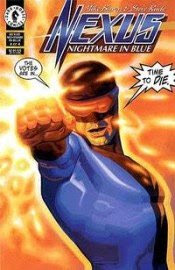 My Favorite Ongoing Series are: 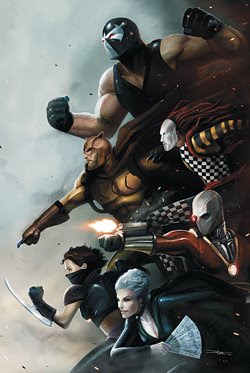 
Yes, there are some omissions just because there always are. For instance, Miracleman isn't on my list anywhere. The reasoning is because most comics fans are never going to read/own it and I'm tired of giving it lip service.

Searching for it now will give you more info about why you'll never see fit again that about the story itself. I'm over it and more than willing to promote stories you can find...well...except for the Great Darkness Saga, which is out of print :)

It's like, "You never read Miracleman???? You poor doomed soul. You should have been there!"

In music, it's the equivalent of Woodstock and if you're from Chicago, it's fucking Riverview. I'm willing to let it go...or I can rant all day about it because it's worth mentioning.

Go buy the stories I did mention and read good shit!

Terry
Posted by Unknown at 9:29 AM No comments: