While this topic has been beaten to death at this point as it relates to "Should DC have hired Card or not", I'm feeling like the real problem with DC hiring Card is that it looks to me like DC is treating Card's detractors the same way it treats diversity in general.

DC didn't just hire a famous writer who annoyed people to write Superman. Comic book companies seem to troll Hollywood for leftover plot ideas, leaping from the minds of vain celebs all the time. That could have been Kevin Smith or Michael Bay. People on the Internet and in comic shops would have had all sorts of gripes but everyone would have gotten past it pretty quickly.

These guys went for OSC and I have to believe someone in a meeting said, "You do know this guys is ON RECORD as a champion anti-gay bigot don't you?" I'd be willing to bet someone then explained that OSC and some other more desired writer shared an agent or something and if they hired OSC, they could get BIG FISH X to come on board for a Batman GN in time for Christmas!"

Note: Mark the date down so that when the announcement happens, you know I called it.

The problem with OSC goes beyond bigotry on the part of the politics and finances of the writer. The problem goes to the alleged efforts the publisher has made towards respecting and promoting diversity. it's as if DC has said, "Come on people, it's not like we've been cancelling comics starring minority characters, which we KNOW tend to have a hard time maintaining traction in a market dominated by white male reader dollars."

DC is hiring people and making business decisions as if each one takes place in a vacuum but for how much longer is this a viable option or way of approaching the quest for sales? 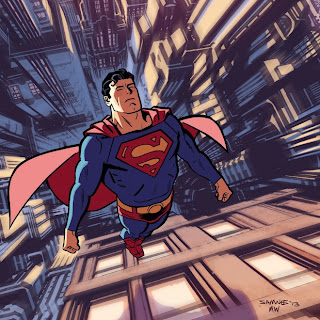 Posted by Unknown at 7:50 PM No comments:

We the People vs. Bigotry

I'll try and make this simple. With all the publicity Orson Scott Card has gotten for being a bigot and getting to write a Superman story, Challengers Comics decided to give the proceeds of any Card Superman stories sold to the Human Rights Campaign.

Apparently some folks on Tumblr and FB don't understand how fighting bigotry works and have been giving Patrick a little bit of lip about it (in typical Internet fashion).

I happen to think Challengers is on the right path with this and fuck bigotry so therefore Third Coast Comics will also donate 100% of the profits of any copies we sell of Orson Scott Card's Superman to the Human Rights Campaign.

Personally this is why we read the exploits of superheroes, right? To be inspired to fight against injustice and inequality wherever we see it.