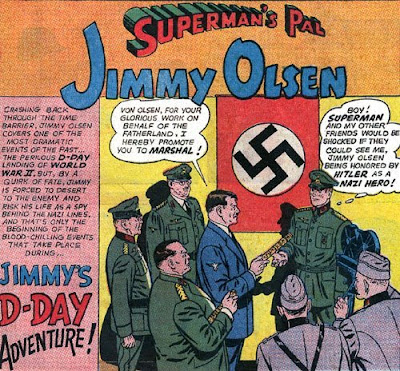 This is the reason why heros give their sidekicks masks and should be hangin out with normal folks. You'd never see Robin doiing this shit even for the cheap yuks.

You know why? Because Robin, as soon as he got the mask, would understand that if he ever came face to face with Uncle Adolf, he's supposed to knock him the fuck out.

Jimmy Olsen on the other hand? He lost his damn mind the second Superman gave out his cell phone number. Now you can find Jimmy off on Alien Worlds, turning into turtle people or wearing the Satanic Helmet of Hate or some other nonsense all the damn time!

Even Speedy just went and shot heroin. He didn't try to sell the shit. THAT would be a Jimmy move.

"Hey Superman's not around...I think I'll hang out with these fellows over here from the wrong side of the tracks and sell blow! Wait til Lois gets a load a me!"
Posted by Unknown at 7:29 AM No comments:

For those of you who hated Spidey3, you now have Spidey4 to look forward to.

The Los Angeles Times is reporting that Spider-Man producer Laura Ziskin told an audience of theater owners that the fourth installment of Spider-Man’s celluloid adventures is tentatively scheduled to debut in May of 2011. The first three Spider-Man movies currently rank as the top three comic book adaptations in terms of domestic box office success, and the three films have taken in over $2.5 billion worldwide in theatrical showings.

Ziskin told the assembled California and Nevada theater owners that Sony Pictures did not yet have a finished screenplay for the fourth Spidey saga, but writers are working on the project and she is hopeful that things will fall into place. Spider-Man star Tobey Maguire and director Sam Raimi have not been signed for the film, but Sony Pictures “has paid Marvel to renew its rights” to the character.

The Spider-Man movie franchise has clearly been so successful that Sony isn’t going to walk away from it, but mounting a fourth film presents a lot difficulties and could be a very expensive proposition, especially in terms of personnel both in front of and behind the camera. Aside from money the key to reuniting the hugely successful Spider-Man team is a good script--after first indicating that he was walking away from the franchise after Spider-Man 3, Tobey Maguire has said that he could be tempted to return if there was a great script.

If things do fall into place for Spider-Man 4, a May 2011 date could still be dicey since that is the month picked by Marvel Studios for the release of its Captain America movie (see “Iron Man Sequel in 2010”). While there is no guarantee that either film will ready for a May, 2011—if they are, it could result in a very interesting game of debut date “chicken.”


Now I don't know what's left after having Venom and Sandman shoe horned into part 3 so you'd better get ready for both a huge dose of creeping gigantism as Spiderman fights Mysterio, the Lizard, The Rhino, TheVulture and the Chameleon all at the same time.

He'll do it while dating the Black Cat, driving the Spidermobile, wearing the Spider Armor and solving the mystery of his clone, Ben Reilly, played by one of the guys from the Office.
Posted by Unknown at 7:16 AM No comments: 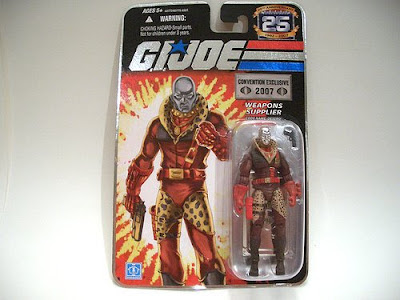 Now this is what any self respecting terroristic arms dealer needs to be wearing. Any man dressed like this can probably make the hell out of a HISS tank or those swank one man helicopter jobs.

Christopher Eccleston, I'm lookin at you!
Posted by Unknown at 11:21 AM 1 comment: