Night Thrasher! In the 90's he led the New Warriors, which were Marvel's answer to the Teen Titans. He was like the team's Batman & Robin rolled into one, except he was blacker, angrier, and rode on a skateboard. 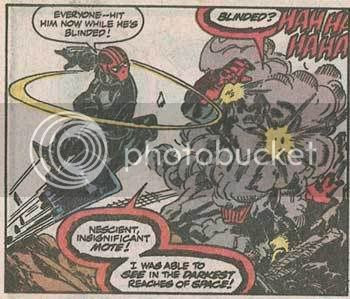 Most skateboarders were content to gleam the cube on the smooth pavement of skate parks. Not Night Tharasher. He skated through rubble and explosions. Have you ever skated through a pile of rubble? You can't. Night Thasher can. And why? I figure he spent his billions making one of those flying skateboards just like in Back to the Future 2. It ran on banana peels and beer, and the wheels were just for show. Because that's how he (doesn't) roll.

True fact: A few years ago, Night Thrasher was optioned as a prime-time tv series. According to the pitch, he would have been a young hip-hop entrepeneur who fought crime, probably with the help of some nerdy asian dude in a van who made all his gadgets and stuff. And his arch enemy would probably have been Richie Whiteman. But one thing's for sure, he would not have had a skateboard. Because nobody in Hollywood has ever seen a brother skate.
Posted by Banana Oil at 1:58 PM

Well that's not exactly true now but would have been at the time. Night Thrasher is directly responsible for Sal Masekela, Pharell AND those nerdy kids out in Oakland called the Pack who are managed by Too Short.

This movie can get made now because Brothas will skate the shit out of it.

Since he was young Black and Rich, he'd be played by 50 Cent because Luda is just too lightly complected to ever come off as angry. Only dark skinned Brothas get to be angry in Hollywood.

Denzel had to be Malcolm X or have a kid dying of cancer to actually be pissed off and Lawrence Fishburne was pissed in Boyz in the Hood but he was a seething pissed and he barely left the house.

Adibisi? That was one pissed off black man though. he took a machete to a dude and ended up in OZ with a double stick hat.

Caramel dudes need a cause. Dark Chocolate can go crazy.