DC Relaunch: The Savage Sword, Mace and Cestus of Hawkman 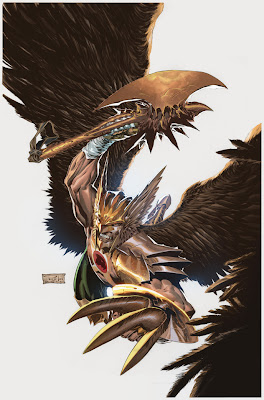 TF: Geoff Johns believes saying things over and over in interviews will make them true, rather than putting them in the actual stories. “Hal Jordan is just like Indiana Jones,” for instance, despite all evidence to the contrary. And also “Hawkman is Conan, with wings!” Put the crack pipe down. Strapping D&D weapons on Hawkman is not going to get folks to respect him. I don’t know if anything would.

DM: On one level it works. He is interesting looking almost always. I think people just don’t care about Thanagar or his time lost love.

TF: Maybe Hawkman doesn’t belong in a world where every other superhero has more impressive powers.

DM: This is a function of writing. If Hawkman had the power to run fast instead of fly he’d be Flash and honestly, the only difference in their powers is that one gets you there faster. Make him interesting and give him a mission we can connect to and he can have the power to talk to fish.

That being said, I just spent a paragraph talking about Green Lantern in the Hawkman column so until he becomes Indiana Jones, Hawkman is screwed.

TF: Aquaman is Conan, but underwater!

DM: Aquaman should be Macbeth underwater.

TF: Jonah Hex is Conan, but with guns! Actually that one is true.

DM: That one is true.

DM: I used to have this idea that Hawkman was like Batman but with feathers and missing a shirt. I wanted to give him a pet Hawk and a sidekick and a battle cry. Then I realized I just wanted more cartoons designed by Alex Toth.

DM: Which just means that Hawkman is further doomed. Also this book is written by Tony Daniel, who hasn’t shown me much in his writing career.

TF: That’s twice now in this list a hot artist gets a marquee character to write.

DM: Is Tony Daniel really a hot artist? I mean I know DC has a time machine set to 1997 but dammit, they came back with Tony Daniel not Paul Smith or Bryan Hitch.

TF: They thought he was valuable enough to give him a scripting credit. Kind of like how they let Tom Welling direct some of the last seasons of Smallville, or how somebody gave William Shatner a recording contract.


DM: I know what you’re saying but isn’t it like the bid against themselves? I mean was Marvel gonna come along and give Tony Daniel Thor or something? I think the Tom Welling deal is different. He at least had actual fans. The Shatner records are gold BTW...


DM: You know what? I think this thing with Hawkman now makes more sense. He’s that idea that is always good for a few laughs and serious talk over booze, like Bruce Willis, William Shatner and the WB. Then you take it further and make it real, and it’s not long before there’s a guy flying around with no shirt, brooding and swing a fn mace....Then you realize...”CRAP....we just gave Hawkman another book and canceled Secret Six!” 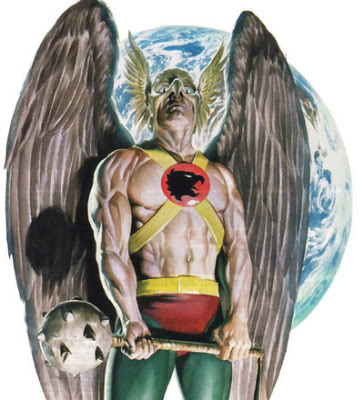 Hawkman (the silver age one, anyway) has ALWAYS been about the D&D weapons!

First, I am still going to buy this book, so there.

Second, DO NOT dis Shatner's albums. As DM righteously points out, they are in fact gold.

His biggest problem is the ADD of the writers and editorial staff. The writing never really went past an origin, a costume and weapons he'd use to bring to the party. The question of why Carter throws on wings and beats people with shit he finds at work has not really been answered in a way that satisfies readers (not the Golden Age version anyway). As an alien cop? Uh we have one (two, three...shit we got enough policing from Space, thanks). We don't give a crap cause we know he isn't a fleshed out character. Writers get bored just thinking of a way to write him. As an alien cop, why does he fight crime on Earth? As a reincarnated ruler/archaeologist again WHY fight crime? If I were writing this reboot, I'd make him more like Dog the Bounty Hunter retrieving both Earth and alien based criminals. Not having him be part of team book, an altruistic vigilante would reduce the comparisons between him and well-thought out popular characters who do the same thing with better powers and well-written back stories.