DC Relaunch: DC Comics Presents...a fervent hope that you like this format! 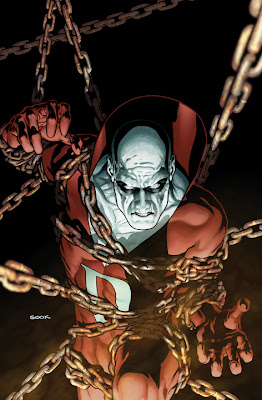 TF: I happen to like anthologies, but have any sold well at all in the past 30 years? OK, technically DC’s Wednesday Comics was an anthology...

DM: Hell no and this book is another sign that someone at DC is asleep at the switch. The one thing DC didn’t really need in the last year was a title at $7.99. If you’re gonna do DC Comics Presents, just bring back the old team up title. This should be another way DC gets fans interested in its reimagined characters and history.

TF: In the olden days, team up comics like DC Presents or The Brave & The Bold were how you spotlighted up-and-coming heroes or characters that hadn’t been seen in a while. That Brave & The Bold cartoon show was created specifically to be a gateway drug into the DC universe, and it works. Tune in for Batman, then learn about Deadman, or Bronze Tiger, or how many Blue Beetles there are.

TF: That said, it was at least wise to hire Paul Jenkins. He’s spent the past few years doing nothing but short character studies that aren’t involved with the continuity of the monthly comics.

DM: On paper that’s a maybe. I’m not sure that people are going to pay for this. Folks say they don’t want continuity but then find ways not to buy the books free of it. If DC wanted to give us a Deadman series, they should have thought of that when they came up with Brightest Day. That was a Deadman ongoing that got cancelled after 24 issues. Occasionally, Hawkman did stuff in it and there was a talking lamp. Right before Deadman could say goodbye in his own book, Swamp Thing, Aquaman, The Hawk People and Firestorm showed up to say, “We tried to make your book better but oh well, can’t get blood from a fucking stone, Deadman, see you after the relaunch!”

DM: I will say that this cover is by Ryan Sook and if he were drawing the book, I'd be all over it still!