DC Relaunch: The Firestorm that is...Firestorm 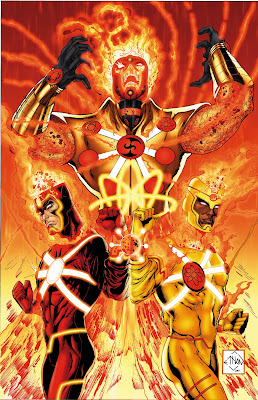 TF: So Ronnie Raymond and Jason Rusch. I liked when they used this combo on the Brave & the Bold cartoon. Although Ronnie was a gym teacher in that; here they’re students roughly the same age. DC says, “This is not a reboot.”

DM: Well I can see them being the same age since comic book characters don’t really age and Ronnie never exactly hit pension status. If you recall, a lot of the original Firestorm’s appeal was his age and outlook. They can work well together. That doesn’t speak to reboot quite as much. You keep forgetting that the relaunch may not really be for us. It’s for your literary minded and e-reader using cube mates. THEY don’t wanna read all about the complications of Firestorm the way you remember it.

TF: I think DC puts these contradictions in their press releases to fry the brains of any killer robots who see them.

DM: I think DC says things that make sense to DC and hope Marvel says something crazier the next day so we stop talking about the contradictions.

TF: I saw a small thumbnail of this cover and thought “what’s with the almost-swastika?”

DM: I saw the cover and thought, “Alright, those symbols represent the 8 hidden States of Firestorm’s existence and he’s unlocked like 3 of them!” You know, like in Iron fist.

TF: I could get behind a teen hero who unlocks new “achievement” powers.

DM: Look, you get Gail Simone on a book so this is one that will be crafted well. You’ll get development, support and no bullshit here. You’ll also get a fun comic too. I can’t wait to meet the supporting cast and Cinar is going to art the shit out of it. You know what I miss about the Firestorm concept though? I want some actual science in it. The point of old Prof Stein was that he could do the science while Ronnie did the being young and cool. Just give a brotha some science, Gail...