The New DC Is on the Move: The Relaunch

In more ways than one.

A lot of folks are up in arms about the DC “Reboot”/Renumbering or whatever you want to call it but no matter what, it’s a vehicle for Day and Date delivery of comics via the Internet and this is probably the best way to do it.

This is Doc Midnight and Trey Formidable giving you the blow by blow...

Now we’re going to analyze the 52 tiles DC is offering in order of their revelation to us by way of their blog.

First Up - The Justice League by Geoff Johns and Jim Lee 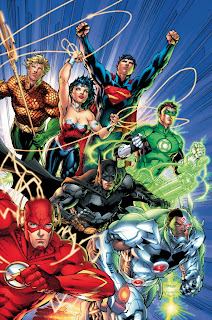 TF: I can’t believe nobody in this picture is wearing a jacket.

DM: It’s true but what concerns me a little more is really an issue of composition. Seriously. Is there a bigger way to say “Jim Lee just wants to draw Batman” than to have Superman, the most important member of the JLA, flying out of the top of the page like he’s Hawkman or something?

TF: Cyborg. Is he there because he’s a graduating Titan or because he was on Superfriends? With Johns you never know.

DM: I think you have an issue with Johns and his love of the Silver Age but lets be honest. DC is the “Legacy Loving City” and if one guy deserves it, it’s gonna be Cyborg. Now lets just hope the 1st 12 issues isn’t all about his noble sacrificial death so Hal and Barry can have a moment.

TF: Bulky Cyborg reminds me of “Titans Hunt.” That should never happen.

DM: Maybe he’s just bulky because this is a crappy drawing of the JLA. Aquaman looks like Ryan Phillippe. This whole pic looks like ti was drawn by the guy they hired to draw Hawk and Dove...who doesn’t like drawing feet....

DM: Yeah...a lot of these relaunched books scream 90’s. I stunned the League doesn’t have a Top Secret Base inside the high rise of a secret corporation owned by Bruce Wayne. Anyway, back to the book. I’m glad they settled on Cyborg as the clear diversity hire and I’ll support it because Johns is at least a better writer than Lee is a penciller these days.
I’m not dying to make the 90’s the new Silver Age like it looks like Didio is going to do.

TF: He’s banking on 90s nostalgia? So that’s why he put a Bloodlines character in The Outsiders.

DM: My last point is that I think this particular relaunch misses the best chance to pull the whole line wide relaunch together. I loved Grant Morrison’s statement that the JLA should be the biggest and best the DCU has to offer. This Super Friends style lineup seems to be missing like seven other characters that would really make it pop. Those seven characters are getting new books and in the new DC they could be right at home in a JLA relaunch. Just the same, I'm buying this one.

TF: Well there IS more than one Justice League title launching...but we’ll get to those later.

Nicely done, guys. Can't wait to read more of your thoughts on the books, especially about the new costumes (screw content and ideas be damned!). I'm surprised you didn't mention the collars. So many fans harped about the collars that someone on Twitter joked that the only character that didn't get one was Krypto.

I like commenting on costume design but some fans just like to see themselves type. I think the collars thing is a Jim Lee device specifically. When the book comes out, there will probably be no collars anywhere and GL will even be wearing a ring.

I totally forgot about the GL ring fiasco. Thank you for that little bit of Lee's unintentional comedic genius.