Regarding Moon Knight #13: KUDOS to Charlie Huston for not only illustrating the "Old Testament" attitude we were speaking of earlier, but also for seeming to back up my next point.

Denny O'Neil, who wrote Batman in the 60s and edited Batman in the 80s, famously declared that Batman disguised himself as Bruce Wayne, not the other way around. He also said lots of other rubbish like Batman is impotent and he never caught his parents' killer, but that's an outraged rant for another day.

As Batman has Millionaire Bruce Wayne (and on occasion, Matches Malone), so Moon Knight has Millionaire Steven Grant and Jake Lockley (and Marc Spector, and Khonshu, and in the Ultimate Universe, a little girl with no eyeballs). Pretty much the primary way writers express the "Moon Knight is CRAZY" concept is by emphasizing his many identities.

Um...yeah. What say we leave the multiple-personality shtick to Bruce Banner, ok?

So who's really under the hood, Mr. Moon Knight? Jake Lockley?

You can't fool us. That's just how you pose as your own stoolie to the get the word on the streets. Steven Grant?

Nah. That's how you infiltrate high society and finance your operations. Are you the Avatar of Khonshu?

Nice try. You'd have to be an idiot to fall for that one. But are you Marc Spector, ruthless mercenary and killer? 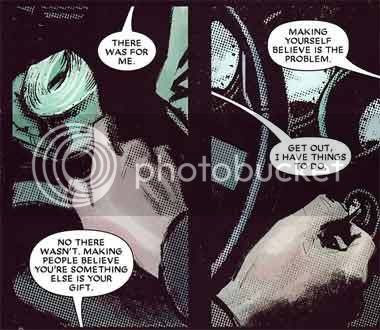 I submit that Marc Spector was dead inside long before he started wearing a cape. I submit there is nobody under the hood. And that may be even scarier.

A man who has no sense of self at all. Every face he shows is a tool, a step to carry on his mission. He is unknowable, because there is nothing there to know. He's a blank slate; only the mission of vengeance matters. I find this direction intriguing. However, it requires the supporting cast to carry the emotional load. Fortunately we have Frenchie and Marlene, and perhaps Doc's idea of "The Moon Knight Family" has a use after all. I say if you're going that way, the answer is move him into the realm of The Shadow rather than Batman. The earliest days of The Shadow, mind you, not the radio bastardization--back when he was an unknowable force operating behind the scenes, as his agents wondered just who that manipulative bastard was who gave them their marching orders and saved them from certain death.

Well, readers? What's your counterpoint? Who is this Moon Knight, and why has he endured this long?
Posted by Banana Oil at 2:57 PM

Well the only reason he endures is because he "Looks cold".

There is nothing else there which suggests you should read his adventures OVER anyone elses.

What? You want a vengeance guy? You have Ghost Rider and Punisher.

Do you want a highly skilled genius fighting...whatever, Well I give you Black Panther.

He's just Marvel's Batman and when it comes right down to it, Marvel uses Captain America for that.

Basically if you're doing Moon Knight, you're excited when you get to make him crazy and draw him on a roof top looking Bad Ass.

You are doing Spawn at that point.

I have never heard a comics fan say, Man I can't wait til Moon Knight shows the Avengers what's up"

I have also never heard a comics fan say, "Dude, I can't wait til we get more of Mook Knight's origin."

I HAVE heard comics fans say, "DAMN!!! He has this ghost of a crazy dude following him around and I LOVE that Moon Ship!"

Folks just want to see him looking cool in costume.

I randomly found this post (and the others) and just wanted to say that I absolutely fucking love it.

This would be a sweet Moon Knight. The end.