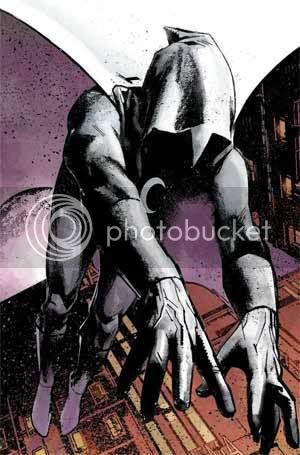 Adding more Batman trappings to Moon Knight? Is he gonna be a parody character forever?

There is one thing Doc and I are agreed on: Moon Knight is Old Testament. From Marc Spector's rabbinical dad to Khonshu the Egyptian god of vengeance, Moon Knight is all about an eye for an eye. This is how he can stand apart from the other street-level Marvels wandering New York City. He doesn't need colorful bank robbers, Spider-Man has that covered. He shouldn't be beating up mobsters, that's daredevil's job. Playing bodyguard for cash? There's at least 5 guys who've done the "Hero for Hire" bit. And the Punisher took all the guns.

Let the punishment fit the crime. With Moon Knight, killers get killed. Thieves have something precious taken from them. Combined with his crazy reputation, all the other Marvel heroes think he's that dude from "SAW."

That said, wreaking Mikado-like vengeance on petty criminals will get boring after a while. So this m.o. is just in the background. What epic battles should a Moon Knight have?

Quick, name as many Moon Knight villains as you can in 10 seconds.

Time's up. Right now you're amazed MK was ever popular. He's got fewer quality bad guys than Daredevil! He's gotten by for decades on a COLD look and Batman's gimmicks.

What are the building blocks of his rogue's gallery? In the next installment, we look into the past to find themes for the future...
Posted by Banana Oil at 6:22 PM

He'll stop being a parody character when he actually becomes about something. People LOVE LOVE the Squadron Supreme and THEY are the Justice League but in that Gruenwald series, they became about something. Giving him a MK Family won't stop him from being all about the Old Testament but it will move him from being a clone of Batman who became a lesser version of Spawn.