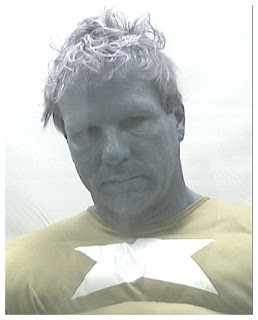 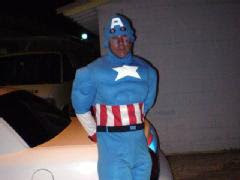 APRIL 24--Meet Dr. Raymond Adamcik. The Florida man, dressed as Captain America and with a burrito stuffed in his tights, was arrested Saturday night for allegedly groping women at a Melbourne bar. Adamcik was part of a pub crawl in which participants wore costumes. While at the On Tap bar, Adamcik, 54, allegedly touched the genital areas of two women, according to a Melbourne Police Department report, a copy of which you'll find here. "Because there were so many cartoon characters in the bar at this time, all Captain Americas were asked to go outside for a possible identification," notes the report. One woman positively identified Adamcik as the superhero who groped her. While being booked, Adamcik asked to use the bathroom. It was then, police charge, that he attempted to flush marijuana, which apparently had been hidden in his blue tights. Adamcik was charged with battery, disorderly conduct, and pot possession. He was released after posting $2000 bail. Sadly, since the Melbourne P.D. was having camera problems, colors in Adamcik's mug shot were rendered poorly (he actually looks more like the Incredible Hulk). But Adamcik was later photographed at the Brevard County jail, where this clearer photo was snapped. (4 pages)
Posted by Unknown at 8:22 AM

It could only have been better if his wing man was a dude that looked just like Robert Downey Jr. He'd be all dressed in an Iron Man outfit and everything. He'd have a flashlight in his pants. Todd Bridges could come and take over for the wing man when it was clear that he'd be over served.