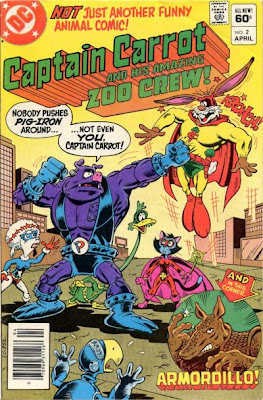 Right on! And hey, let DC know I'm their man, when it comes to writing some Young Frankenstein...

He is basically Superman but he is a kid!

a kid who turns into an adult with a word

As adults we forget, or don't notice. However for a 6-7-8 or what have you year old that is a HUGE deal.

Introduce a 6 year old to Captain Marvel and watch him or HER become a fan for life.

Yeah, that one was #6. There has to be a kids Shazam book.

I LOOOOOVE the old CC Beck Captain Marvel, but I feel like noone has the sense of fun that he had... Partly because they are shackled with this really strange alter ego (who only wears one set of clothes and is a boy reporter?!?). I think they should reboot Captain Marvel with an 8-year old Billy Batson who is a normal kid (other than being orphaned and having a foster family) dealing with normal every day problems of a foster kid. he could even be from a bad neighborhood. Anyway... by making a younger BB and making it really from a kids perspective you could have a comic that kids would read with the diligence of harry potter. Kids are better readers than ever these days. They don't just want easy adventure stories, they want good epic yarns.

Good point about a lack of good kids comics. Have you ever read Michael Chabon's essay about the comics industry ignoring kids. If you haven't you should check it out.