So today I asked the twitterverse for a suggestion for a topic (because I'm not ready to talk X-Men again just yet or post the one "Forever" topic I'd be all over.
What I got was a suggestion from Bobbidigital at www.allthingsdork.com
He asked: What effect will color tablet size computers have on the comic book retail business if any?How do retailers innovate?
I think this translates to "How will the reintroduction of the Tablet PC to the market affect folks in my line of work.
In my opinion, in it's current application, I can't see it making a lot of impact. Apparently there are some folks out there that think that the Microsoft supported version of this product will be good for business based solely on the idea that MS pushes out a ton of apps that businesses already use BUT you realy have to look at what business owners are likely to be considering.
"What does this (relatively) new technology do for me and can I get that done with the old technology?"
Hey, I don't know about restaurant owners, bike shop owners or massage therapists but I own a comic book store. It's Third Coast Comics, in the Edgewater area of Chicago, and it's a sexy bastard of a shop if I do say so myself but it's kinda Hugh Grant/Michael Shanks/Alan Tudyk sexy. The point is that it's not Johnny Depp/Matt Damon sexy just yet.
Hugh Grant sexy can be fine with a good ole desktop PC running whatever it is I run and doing it's thing here in my community like I do. Hardware isn't an issue for me and for most comic book retailers who are basically rocking something Wilfred Brimley sexy at best, new technology is more a hindrance than a help.
I can think of an almost practical application of tablet technology. I could take a tablet around the store when doing some inventory counting like crap task and instead of needing to print out count sheets or make notes, I can log right into my inventory suite and adjust and reorder, etc.
I could do that but what am I really doing? I'm not actually saving myself all that much time. I am just looking all cool and high tech and what not.
Comics book retailers need less hardware upgrades and more marketing strategy upgrades. I do realize that there are some people out there who are completely swayed by certain intangibles a shop might have. I know people who, when given a choice of two shops, will tend to choose the shop that sells Family Guy lunch boxes as opposed to the shop that just has the books they love to read.
This is largely because the consumer experience is about more than just getting what you want. It's also about getting what you want in the kind of place that you really like to envision yourself in. If I'm walking around the store with a tablet under my arm there will be some folks who will see us as a "more modern shop" and may gravitate this way. I'm not sure it's worth it. It just invites douchebaggery. Yeah, I said it. 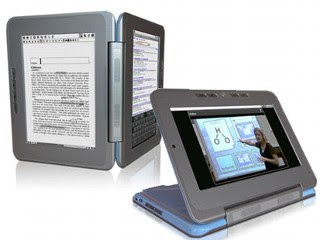 Now there is also the Entourage Dualbool E-reader, a delightful piece of machinery that takes an anti book device like the Kindle and adds an element of Tablet PC for those of us that not only can't turn real pages but have found the physical space between a monitor and keyboard to be a limiting experience that can only be compared to the lead character in "Johnny Get You Gun".
The questions is as follows, "Will comic book collectors stop buying comics in order to simply download them onto 10 inch screen?"
The answer, as I see it is, "Anything can happen for some people, especially those whose wrists have gone numb from all holding of periodical material in their grubby little fingers."
If the only reason you're buying actual comics now is that you were waiting for a 10 inch touch screen then basically Santa got your letter. You might even save some money, except that the countdown is on for publishers to push PDFs to you in such a way as to make illegal downloads of comics not as preferable by giving you a little more content than just the PDF and we also aren't all that far from a Print on Demand element to the business where retailers like myself can get a slice of that digital pie as well.
Having a tablet, in store for retailer use doesn't help so much as I see it and the percentage of people leaving print comics for digital doesn't really seem to be kicking the ass of the number of people leaving monthly comics for the bound comic format so if nothing else, a third leg of the market has just developed which a smart industry will figure out a way to get in on.
The way I see it, smart shops will be seeing a slight decline of tech savvy fan boys but we'll be seeing an uptick of customers who check out the New York Times best seller list before heading off to their local book vendor, where incidentally, they really don't want to be shoulder to shoulder with fanboys anyway. Especially fanboys who read books on a screen.
As a retailer I've sort of already traded a certain level of "fanboy" for the next generation of "graphic novel enthusiast". This is the market and it's a lot bigger than many older retailers have ever really been able to crack. I believe that in order to really impact the industry, digital comics enthusiasts will have to cut much deeper into general fanboy numbers AND win over folks who have simply changed their preferred method of getting print comics.
How's That!
Terry
Posted by Unknown at 1:19 PM

First, dude, you need to start a podcast.

The big thing, as you put it, is marketing. In creating the right environment to sell the right product. That's why a place like TCC works; you've got open space, lounge area, an assortment of titles and books. The comic shops that should be worried are the ones with toys stacked from ceiling to floor in the window, blocking out daylight; the ones with a labyrinth of comics that customers have to shuffle around. Like you say, the "fanboys" are giving way to "graphic novel enthusiast" (though fanboys never say die). Like any other modern media, comics are evolving and crossing with other media in the process.

Actually we do have a podcast :)

Nice! I'll give it a listen today at work.

And I'm glad to here Heroic Hips is getting back on track. I really dug her site until...well, she stopped.