Who is this guy fighting Superman? 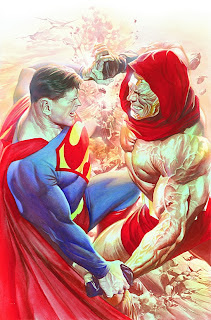 James Robinson knows. I know. And after this, so will you.

Hello and welcome to the 13 Days of D.C.F.I.S.-mas! Where we'll be dissecting DC First Issue Special.

You could say F.I.S. was the 1970s answer to Showcase. Or you could say it was Bizarro-Showcase. Whereas Showcase brought us the first appearances of the Silver Age Flash and Green Lantern, the Metal Men, Adam Strange, the Challengers, Enemy Ace, Bat Lash, and many other classic DC characters, First Issue Special gave us one character that was actually popular and a lot of one-hit wonders that only people like James Robinson or Gail Simone remember.

"Sounds like a flimsy premise to milk for 13 posts," you say.

"Bite me," I say. Let's begin with the guy pictured above? Who is he? Hercules in a hijab? Samson in a scarf? Conan in a keffiyeh? 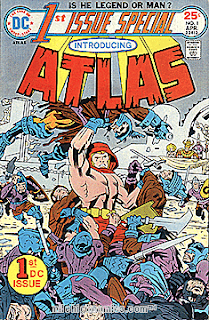 It's ATLAS! No, not the titan Atlas from Wonder Woman. No, not the Atlas who puts the first "A" in "SHAZAM." Not Charles Atlas, who can make a man out of YOU (and who can sue you for creating Flex Mentallo). This is the other other other other Atlas. Is he legend or man? Man or monster? Floor wax or dessert topping?

Sword & sorcery is not a genre Jack Kirby really touched, apart from a few pin-ups in Marvel's Conan comics. This comic is Exhibit A of why he didn't do Sword & Sorcery. The King was not really firing on all cylinders here.. It's a pretty pedestrian story of vengeance seeking hero, evil overlord, weaselly sidekick, etc. What is notable about it is how accurately Kirby was able to predict the plot of the Schwarzenegger/Milius film "Conan the Barbarian" nearly a decade before it came out: 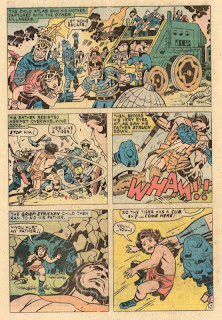 You can probably piece together the rest. The boy grows up into an impossibly muscled barbarian, swears to bring down a reptilian cult, befriends a wizened annoying old guy, etc. etc.: 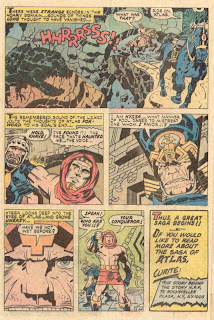 If there had been a next issue, we would almost certainly have seen Atlas tied to the Tree of Woe and go on to kill several mighty warriors with Wile E. Coyote traps. CROM!

OK so where is he now?:Well, apart from some tantalizing cameos in "hypertime" when Karl Kesel was writing Superboy, and standing in the background of Kingdom Come (yeah, him and like 900 others), we never saw much of old Atlas. But James Robinson's bringing him back, just like he dredged up long-forgotten characters like Stalker or the Blue Starman.

But that's another story.
Posted by Banana Oil at 8:19 PM

Yep, I've had that one since it originally came out when I was just a kid. I was always sort of sorry that there wasn't more than one issue. I think it was closer to an Italian sword and sandal film than to a sword and sorcery tale, myself. It has some great Kirby art, even if the story is so so.
The storyline is also similar to the first issue of Don Glut's S&S comic Dagar the Invincible. Dagar too was the last survivor of a raid by a villain's army who grows up to track the villain down and wreak vengeance.
Oh, and Kirby did one cover for Conan. Giant Size Conan number 5. Reprints the Conan/Elric two issue team up.

Is it just me of does Alex Ross make Atlas look like Superstar Billy Graham?

How soon was DCFIS before the DC Implosion?

DCFIS was where you saw a lot of Kirby "pilots" as you'll see. This would have been a year or so before the implosion, BUT right around the time Kirby was going back to Marvel. After the Fourth World stuff got cancelled, DC really didn't know what to do with Kirby. Kamandi was the only thing selling big numbers (about 3 years with Kirby and more than a year without him!) They put him on stuff like Justice Inc., The Losers, Richard Dragon Kung-Fu Fighter. And a bunch of one-shot pilots. You'd think Lord Kobra would belong in FIS, but sorry to disappoint--they gave him his own title for some reason...

I'm thinking of throwing in the short-lived DC "Fantasy" titles for later...there's one obvious link between those and FIS...

Yeah, Dagar was Gold Key and not a bad little sword & sorcery comic.