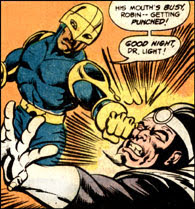 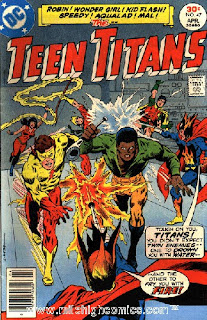 {above: Mal, seen here as Herald, the post-Crisis version of Hornblower. Yes, someone at DC actually thought "Herald" would be a less embarrassing name} These days, Mal! only gets trotted out for anniversary issues and Titan weddings or funerals. But his years of exemplary service have made him a glorious asterisk in the annals of Titans history. There have been other lame black heroes, but no one was as lame as long and in as many different ways as Mal Duncan.
Posted by Unknown at 11:54 AM

Well...Everything you wrote was largely true. The good folks of the time just couldn't bring themselves to back their "good intentions" with actual effort so "Mal Duncan" just lingered in backgrounds and sidelines for his "career". Still I'd give some credit that he didn't get called on to "die from the team".

I'd go so far as to say they tried to back it up with action but in Mal's case, there's only ever so much one could do.